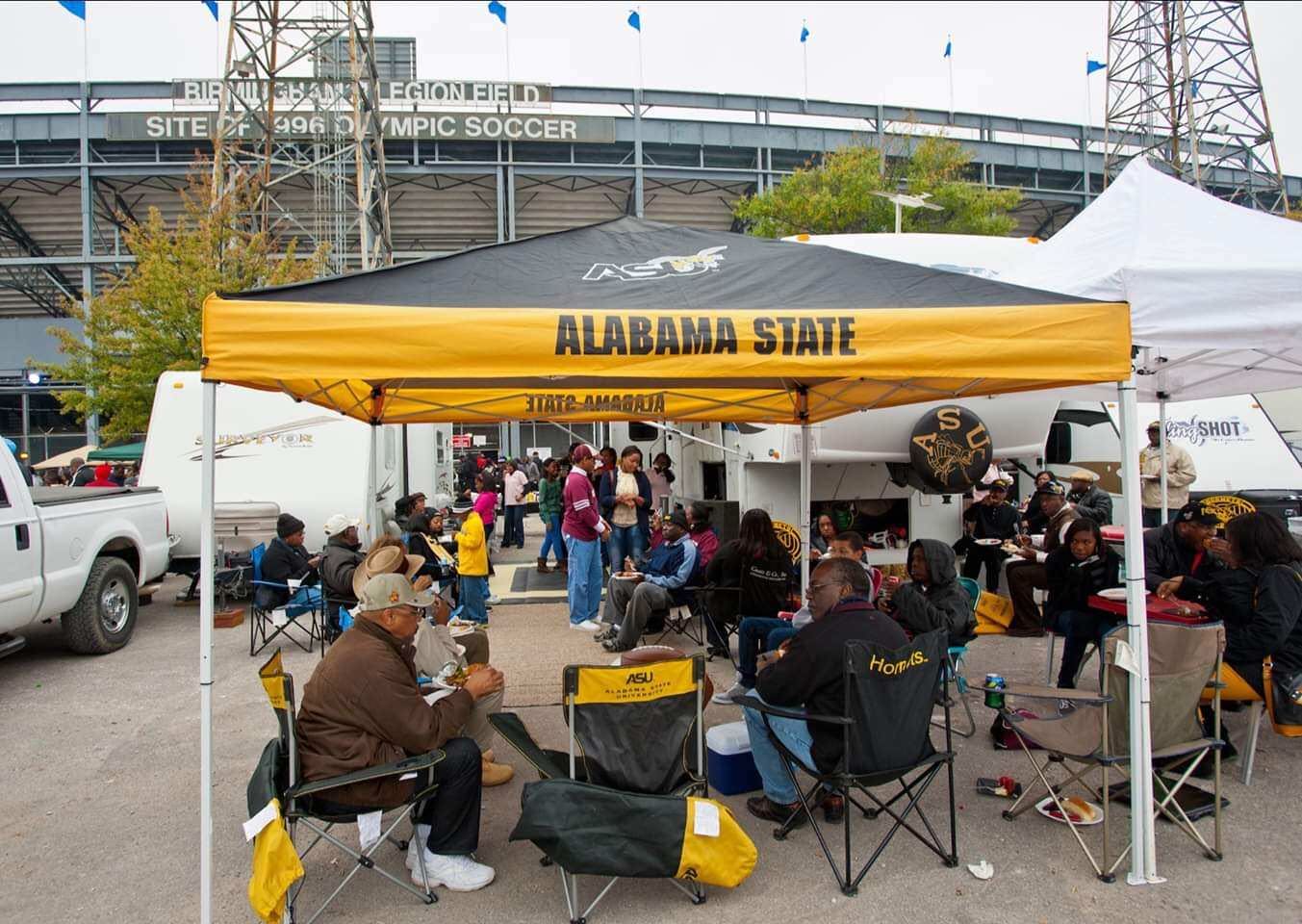 Alabama State and Alabama A&M don’t play until Saturday but fans have already been outside the stadium for days.

Once a year in Birmingham, Alabama the city lives up to its name as The Magic City. For one week in Birmingham a city that’s usually entrenched in SEC football becomes maroon and white and black and gold. From Sunday to Sunday people from all across the country will embark on the city for one of the biggest rivalries in all of college football between Alabama A&M and Alabama State.

This rivalry is bigger than football. During the week the two schools will compete in a battle of the choirs, cheerleading battles, pep rallies and even fund raising battles. Celebrities from all around will arrive in Birmingham to take in a scene which is truly amazing. Tailgating starts on Sunday and runs through the following Sunday. By Thursday RVs, campers and tents cover the entire stadium parking lot and even streets leading up to the stadium. Saturday morning between 80,000 and 100,000 fans will line the streets of downtown Birmingham to witness the Magic City Classic parade which features not only the marching bands from State and A&M but over 100 marching bands from across the country in a parade that’s the largest in the state. Over 100,000 fans will be in the atmosphere on Saturday with the game attendance ranging from 62,000-69,000 fans. The only way to describe this week, is Magic! That’s what the Magic City Classic means to the city of Birmingham and the fans of Alabama State and Alabama A&M. On Saturday for the 78th time Alabama State and Alabama A&M will meet in The Magic City Classic which has grown into one of the largest HBCU events in the country and the biggest economic impact to the city of Birmingham annually.

Alabama State and Alabama A&M have both struggled in recent years, but this year the game has the feel of the Classics from the early to mid-2000s where both teams would enter being right in the thick of things, competing for the SWAC East Division title. ASU enters the game on Saturday with a 3-3 record overall and a 2-1 record in conference while Alabama A&M brings a 4-3 record overall and a 1-1 conference record which marks the first time since 2013 that both teams enter the Classic still in conference title contention.

The Bulldogs control their own destiny. If the Bulldogs win out they will represent the Eastern Division of the conference in the SWAC Championship Game, for the Hornets they would need to win out and hope the Alcorn State drops two conference games. A loss on Saturday by either school would really make dethroning Alcorn State a long-shot which makes this a must win for both teams. The media predicted Alabama A&M be where they are but Alabama State was picked fourth in the division so them sitting in second place in the division with a 2-1 conference record is a surprise to many. The Hornets have improved both offensively and defensively this season and have already scored big conference wins over traditional powers Grambling State and Jackson State.

The Hornets have been led by a talented receiving unit in Michael Jefferson, Jeremiah Hixon, and Jahod Booker who all rank in the top 20 in the conference in receptions and receiving yards. Quarterback Kha’Darris Davis is currently 6th in the conference with 1,001 passing yards and nine passing touchdowns. Davis missed the last game against Jackson State but Jett Even stepped in and went 15 of 26 for 189 yards passing in a 31-16 win on the road.

On the other side of the ball the defense has been the strength for the Hornets. They are ranked third in the league in total defense. The Hornet defense has been at their best in conference play only allowing 20 points to Grambling and 16 points to Jackson State in their two conference wins. A win on Saturday would keep the Hornets in the shadows of Alcorn State for the division crown, a loss would mean the ASU would need to win out and have a lot of help to even think about a division title.

AAMU has been up and down all year. The Bulldogs have four wins on the year but the record of those teams are a combined 4-22. In their three losses have been by an average of 21.6 points. Offensively the Bulldogs have been explosive statistically averaging 450.4 yards per game which is ranked third in the league. Quarterback Aqeel Glass has been stellar this season with a league leading 2,062 yards passing and an average of 294.6 passing yards per game. Glass has also tossed 19 touchdown passes which also leads the SWAC. Senior running back Jordan Bentley has been having the season that many have been waiting on. Bentley is currently third in the SWAC with 662 rushing yards, he’s tied for first in the league with 9 rushing touchdowns and averages 94.6 rushing yards per game. Receiver Zabrian Moore has been nothing short of spectacular this season with 36 receptions for 631 yards and averages 90.1 receiving yards per game which ranks him second in the league. Freshman receiver Abdul-Fatai Ibrahim has been a pleasant surprise with 24 receptions and 437 yards and 6 touchdowns which ranks him fourth in the conference. If there is an area of concern for the Bulldogs it is on the defensive side of the ball. The Bulldogs are ranked eighth in total defense and surrender 431.3 yards per game and 33.1 points per game.

In its last out, the AAMU defense showed signs of improvement limiting Grambling offensively and only giving up 17 points. Linebacker Armoni Holloway has been one of the bright spots for Alabama A&M with 65 total tackles so far this season which leads the Bulldogs and ranks him third in the conference.

The Magic City Classic is usually tightly contested and the game usually comes down to one or two plays. Since 2010, five games between these two rivals have been decided by two possessions or less with 4 of those games being decided by 5 points or less. Alabama A&M leads the overall series 41-38-3 but since 2010 Alabama State has a 5-4 edge over Alabama A&M. During this decade only once has there been a back to back Classic winner (2012-2013) outside of that the two teams have alternated victories. Last year an emerging Alabama A&M beat a struggling Alabama State squad 27-10. A win on Saturday not only means a year of bragging rights but it would keep either team in the thick of a SWAC Eastern Division Title race which makes this the most important Magic City Classic since 2013. The RVs have arrived, the grills are already smoking, and anticipations are high across the state for the 78th Edition of The Magic City Classic.