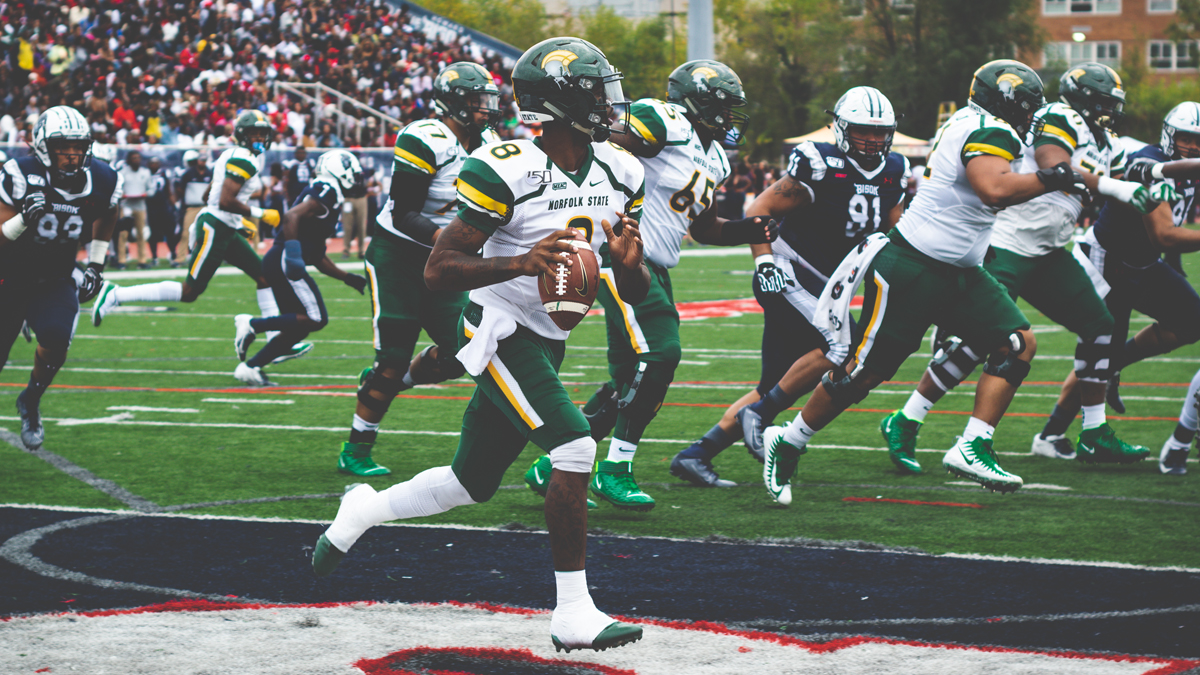 It was Howard’s Homecoming, but Norfolk State scored early and often to bring home the win.

WASHINGTON, D.C. – Quarterback Juwan Carter accounted for 433 yards of total offense and six touchdowns as Norfolk State snapped a four-game losing streak with a 49-21 win over Howard on Saturday at Greene Stadium.

Carter passed for 377 yards and four scores, tying a career high, and also ran for 56 yards and two more touchdowns. Junior wideouts Justin Smith (133) and Tylan McElhenie (109) both posted career highs in receiving yards, with Smith scoring twice and McElhenie once. It was all part of a 648-yard day for the Spartans (2-5, 1-2), their most since a school-record 659-yard performance against Bethune-Cookman in 2005.

The Spartans defense helped NSU pull away from a 28-21 halftime advantage by shutting out the Bison (1-6, 1-2) in the second half. The Spartans intercepted two passes and notched a season-high five sacks.

The teams traded scores early. NSU scored on its first two drives. Kevin Johnson scored on a 4-yard run to cap the first possession, and after Dedrick Parson scored on a 14-yard to tie the game for Howard, Carter tossed a 19-yard TD pass to Da’Kendall James to put the Spartans up 14-7 at the 8:17 mark of the first quarter.

Both teams scored twice in the second quarter. Josiah Crute’s 4-yard TD run tied the game early in the period. The teams then combined for three touchdowns in the final five minutes of the half. Carter’s 4-yard TD run gave NSU a short-lived 21-14 lead, but Quinton Williams threw a 16-yard TD pass to Kyle Anthony with 2:12 left in the second period to tie it up for a third time.

The Spartans were forced to punt after their next possession, but when Howard got the ball back, Spartan cornerback Devyn Coles intercepted a Williams pass at the NSU 47. Three plays later, Smith went over a defender and hauled in an acrobatic 31-yard TD pass from Carter to send the Spartans into the half with a 28-21 lead.

The second half was all Spartans. NSU allowed just 92 total yards in the second half and forced Howard to punt four times in its five possessions. After the Bison were forced to punt on the first drive of the third quarter, Carter threw a 65-yard touchdown pass to Smith, with the wideout outracing the defense after catching a short pass over the middle.

Carter finished NSU’s next possession with a 2-yard TD run, capping an 11-play, 66-yard drive as the Spartans went up 42-21 with just 58 seconds left in the third.

NSU added to its lead early in the fourth. Carter connected with McElhenie on a 30-yard TD pass through tight coverage to cap the scoring.

Carter needed just 15 completions in 23 attempts to amass 377 passing yards, the second-most of his career and most by a MEAC quarterback this year. His six touchdowns accounted for are also the most by a MEAC player this year.

Cephas Harden led the Spartan defense with 11 tackles and Nigel Chavis had 10. Chris Myers accounted for 1.5 of NSU’s five sacks. Safety Nhyre’ Quinerly added a second-half interception for the Spartans’ other takeaway of the day.

NSU will hit the road again for their next contest, a 4 p.m. game next Saturday at Bethune-Cookman.