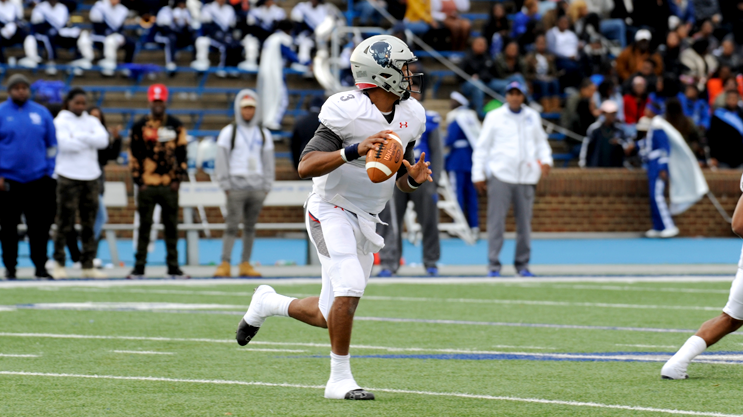 Caylin Newton and Co. had a solid showing as Howard knocked off Delaware State during its homecoming on Saturday.

DOVER, DEL. – Howard freshman cornerback Ray Williams only needed one good hand to put the Bison in position for their first win of the season.

Williams, with a sizeable cast on his right hand, intercepted Tylik Bethea less than a minute into the 2nd quarter, leading to a go-ahead rushing touchdown by Caylin Newton in the Bison’s 24-9 win over Delaware State, spoiling the Hornets’ homecoming in the weekend’s only MEAC game.

“Coach called the play and when your number is called, you gotta make a play,” Williams said as he calmly unwrapped his club cast postgame.

“Sometimes it doesn’t make sense, people ask me ‘how can you do that with a club on?’ Just gotta make the play.”

“I thought we did a really good job of mixing up our defensive personnel,” Howard head coach Ron Prince said. “We had a lot of movement and our coaches did a great job of making sure we didn’t give up the big play.”

DSU (1-2, 0-1 MEAC) jumped out to a 7-0 lead less than 5 minutes into the first half as Bethea threw a two-yard touchdown pass to Kwannah Kollie. Newton countered with a 24-yard touchdown pass to Kyle Anthony at the beginning of the second quarter. After Howard kicked off to DSU, Williams jumped a sideline route, snatching the ball with hand and club. He returned the ball 17 yards on to the Hornet four-yard line and Newton scored on the next play.

“We were well prepared,” said sophomore corner Rodney Dennard, who also recorded an interception. “We kept the intensity up and stayed on top of things.”

Howard will finally play at home next Saturday for the first time this year when Bethune-Cookman invades Greene Stadium. Del State will have a short turnaround as they visit North Carolina A&T for a Thursday night game on national TV.