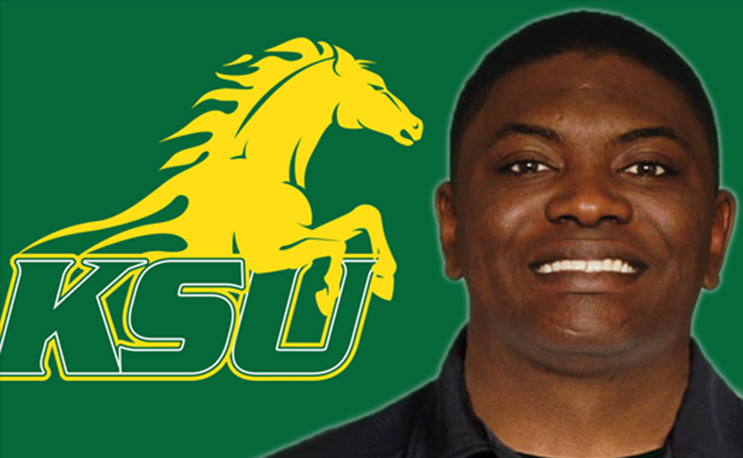 Charlie Jackson, a defensive assistant and defensive backs coach for the Atlanta Falcons in their 2017 and 2018 campaigns, has been named the University’s new coach.

Jackson says his goal for Kentucky State University football is simple: to compete against perfection.

“Every member of our football operation will demonstrate an all-consuming mindset to maximize his or her God-given potential, and we will do the same as a team,” Jackson said.

“I am ecstatic to accept the head football coach position at Kentucky State. President Brown and Athletic Director Etienne Thomas speak my language. My minimum standard is graduating student-athletes, but I am extremely encouraged to know that achieving excellence, across the board, with regard to the student-athlete experience, is a priority for this administration.”

Jackson, a veteran Air Force officer, has a long history with the National Football League (NFL) and National Collegiate Athletic Association (NCAA). Prior to coaching with the Falcons, Jackson served on the NCAA national office staff as a member of the college football rules enforcement group. He led and was directly responsible for the football rules development efforts in the Southeastern Conference (SEC). His background includes multiple defensive coaching roles with the Green Bay Packers and Denver Broncos, as well as coaching fellowships with the Atlanta Falcons and St. Louis Rams. He also served as a college scout for the Seattle Seahawks organization. He has collegiate experience at Colorado, UCLA, Utah State, Buffalo, and the United States Air Force Academy.

Jackson accepted an appointment to the United States Air Force Academy, where he participated in football and indoor track and field. During his football playing career at Air Force, the Falcons were a consistent member of the national top 25 rankings, including a top-10 final ranking and conference championship in 1998.

President M. Christopher Brown II affirms that it is a new day for football on the hill.

“This is a new era for Kentucky State University football,” President Brown said. “Coach Jackson’s impressive mentorship of students on and off the field aligns with our belief of developing the whole person. He recognizes that we are not just interested in winning football games, but we are fully committed to building a championship program and addressing the campus-wide ambition to reclassify with the NCAA in the near future.”

Brown continued, “My personal motto remains ‘excellence without excuse.’ Coach Jackson’s vision of athletic competition aligns with my own. Even more, he has a clear intention to support on-time graduation and gainful employment after college. His coaching philosophy embodies the NCAA’s articulate aims of sportsmanship, amateurism and a balanced life.”

Athletic Director Thomas is elated to welcome Coach Jackson as the next leader of the Thorobred football program.