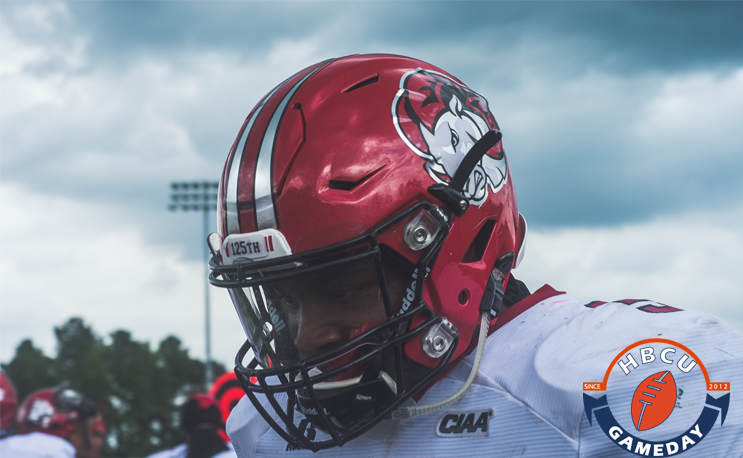 Winston-Salem State pushed past heat, a downpour and a flurry of self-inflicted wounds to start its season off on a positive note. WSSU managed to hold off no. 19 UNC-Pembroke for a 34-31 win on the road which ended a two-game skid to its host.

WSSU junior running back Kerrion Moore provided offense early and often for the defending CIAA champs, running for 230 yards and three touchdowns against UNC-P, providing the final score, allowing WSSU’s defense to bend but keep UNC-P out of the endzone for the win.

The passing game was feast or famine for the Rams vs. the Braves, as Rod Tinsley completed just 6 of his 18 pass attempts, including a 73-yard touchdown pass to Canard Brown near the end of the first half to give his team a 20-0 lead at the break.

The second half has been the Achilles heel for the Rams against the Braves over the past few seasons, and early on it looked like that would be the case again. The Braves capitalized off a Tinsley pick to get on the board with 13:36 left in the third quarter and then cut the lead to seven moments later after the Rams fumbled a punt in its own endzone.
[postBannerAd]
The rest of the half would be a back-and-forth match with WSSU, led by Moore’s two scores, doing just enough to maintain the lead. WSSU produced 436 yards of total offense while holding UNC-P to 237, but turnovers and 10 penalties for 90 yards helped keep the game close.

WSSU gets a few additional days of rest before it prepares to meet up with Bowie State in its home opener for a rematch of the last two CIAA title games.