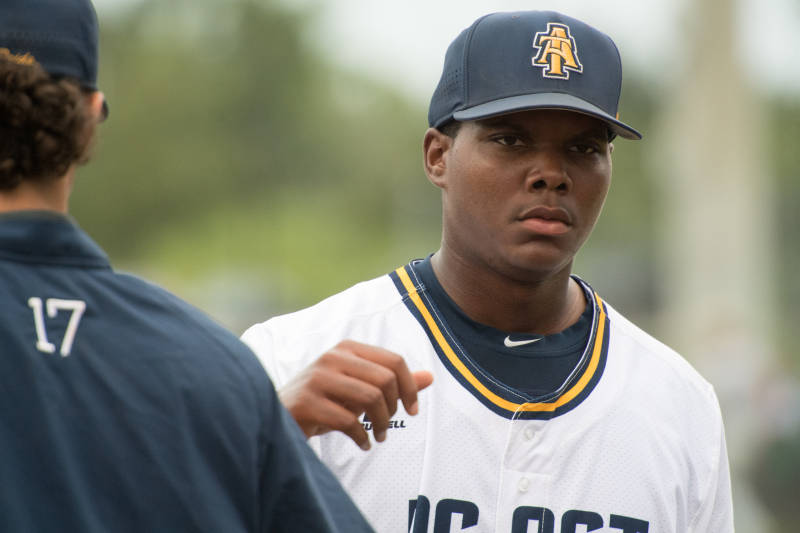 An Aggie is drafted by the Rangers for the second time in five years.

North Carolina A&T had another reliever drafted by a Major League Baseball team. Two years after Cutter Dyals was drafted by the Atlanta Braves, Aggie right-hand closer Leon Hunter (6-foot-3, 220, RHP, Garner, N.C.) was selected 1,045th overall pick in the 35th round by the Texas Rangers on Wednesday.

“I’m super excited for Leon and all the work he has put in his four years here at North Carolina A&T,” said N.C. A&T baseball coach Ben Hall. “He has been a consistent performer for us and had an outstanding senior campaign. I look forward to following his success at the next level.”

Hunter indeed had a career year as a senior in 2019. In 31.1 innings pitched, Hunter posted a 2.87 ERA with 31 strikeouts and only eight walks. He compiled a 3-1 record and recorded 10 saves in 25 appearances to earn second-team All-Mid-Eastern Athletic Conference honors. He was 44th in the nation in saves this season while leading the Aggies to back-to-back MEAC Southern Division titles.

In addition to being drafted, Hunter also has a degree in criminal justice after being a frequent member of the Chancellor’s Academic List and an All-MEAC academic team member.

He made 91 career appearances over 112.2 innings pitched. Hunter has a career 5.03 ERA with 87 strikeouts, 49 walks and 12 saves. His career ended with a 7-8 record on the mound. Opponents only hit .227 against Hunter over the final three years of his career.