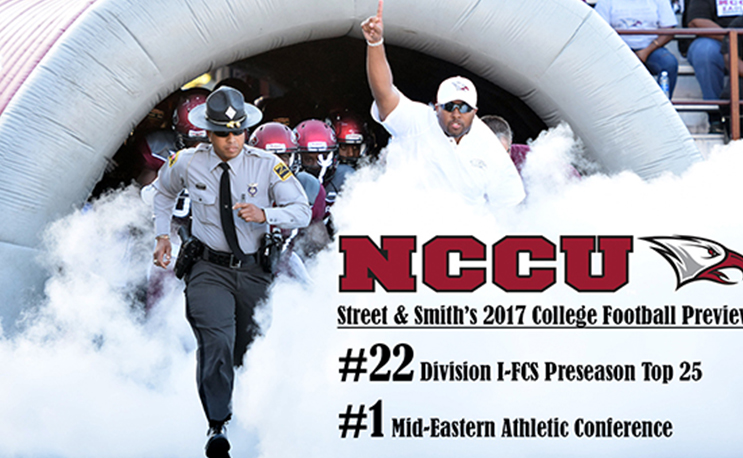 After a 9-3 season and a third straight conference championship, North Carolina Central University is ranked No. 22 in the FCS preseason Top 25 by Street & Smith’s 2017 college football preview magazine.

DURHAM, N.C. – After a 9-3 season and a third straight conference championship, North Carolina Central University is ranked No. 22 in the FCS preseason Top 25 by Street & Smith’s 2017 college football preview magazine.

“We are honored to have a preseason ranking for the first time in our Division I era,” said NCCU head football coach Jerry Mack. “It is truly a testament to how far we have come in the last three years.”

When Mack took charge at NCCU prior to the 2014 campaign, the Eagles were picked to finish eighth in the Mid-Eastern Athletic Conference preseason poll. Now, just three years later, Street & Smith’s has NCCU as the favorite to win a fourth straight league title and the Eagles are in the national FCS conversation.

Mack has led the Eagles to an overall record of 24-11, including a 21-3 mark against conference opponents. His 24 victories are more than any NCCU football coach has ever collected in their first three seasons.

The 2016 Eagles collected the most wins in the program’s Division I era with a 9-3 overall record and an unbeaten 8-0 mark in league play. NCCU defeated nationally-ranked North Carolina A&T 42-21 on Nov. 19 to capture the MEAC championship and earn the league’s bid to the Air Force Reserve Celebration Bowl at the Georgia Dome in Atlanta.
The Eagles received their first national ranking as a Division I-FCS program on Nov. 7, when the FCS Coaches Poll announced NCCU at No. 25. By the end of the regular season, the Eagles jumped to No. 18 and finished at No. 19 in the final poll.
NCCU broke the school’s single-season record with 4,614 yards of total offense, averaging 384.5 total yards per game. The Eagles were also the second-highest scoring team in school history with 347 points. The Eagles made more history last season by becoming the first NCCU football team to win a third consecutive conference championship.
NCCU kicks off the 2017 season on Sept. 2 against Durham neighbor Duke University in the Bull City Gridiron Classic.